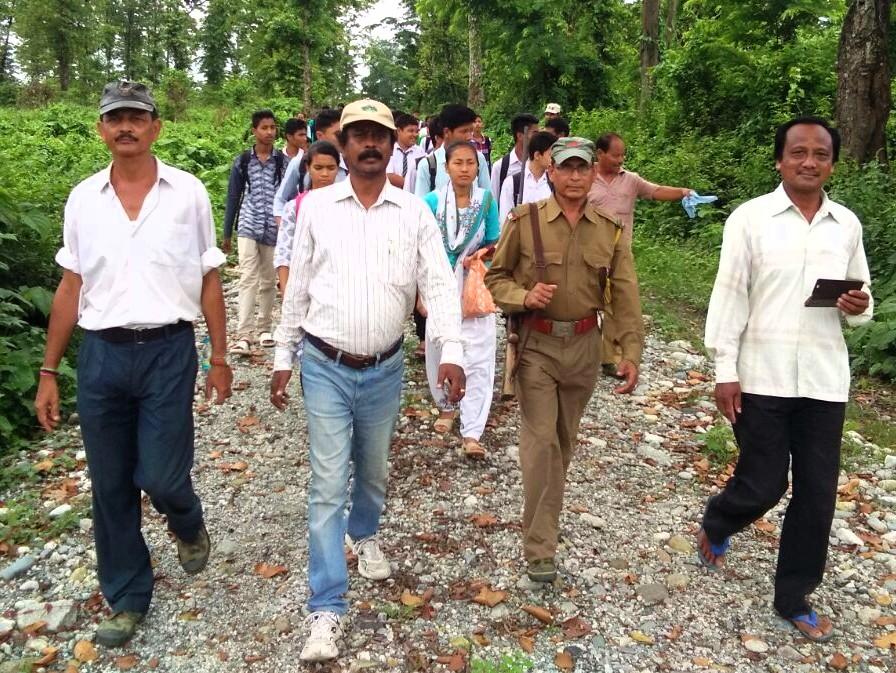 On the occasion of the concluding session of the week long Van Mahotsav celebration in Bhergaon subdivision in Udalguri district,the civil administration of Bhergaon sub-division organized a day long nature study tour for students drawn from various schools on July 7.Forty one numbers of students of ten schools of the sub-division from-Kalaigaon,Tangla, Bhergaon,Khoirabari,Dimakuchi etcwere selected on basis of their activities during the previous six days of the week long celebration of Van Mahotsav in Bhergaon sub-division ie from July 1 to July 6.The group of forty one students (both boys and girls) was flagged off at Tangla at 9 am on July 7.DN Hazarika,ADC,Udalguri cum SDO (Civil) Bhergaon subdivision formally flagged off the nature study tour in presence of several distinguished people of Tangla, Kalaigaon and Bhergaon besides civil,forest officials.An interactive session was held at Nonai Forest Range Office in Khalingduar Reserve Forest at 11 am where students had the opportunity to interact with forest officials on various topics ie-wildlife and nature conservation, psychology and behavior of wild animals and birds,man-elephant conflict,precautions to be taken while meeting wild animals specially wild elephants,role of students in the conservation activities etc. Satya Boro,Range Officer briefed the students on the issues mentioned.DN Hazarika, ADC, Udalguri accompanying the students also spoke to the students.He thanked the students for taking interest in nature conservation activities.It needs mention that man-elephant conflict has taken a serious turn in Udalguri district since 2010 with deaths of nearly 90 people and 40 wild elephants.Presently a herd of wild elephant numbering more than hundred wild elephants have been taking shelter in Khalingduar Reserve Forest.It was an appropriate action of the civil administration of Bhergaon sub-division, introducing the students to wildlife.The students also participated in a eight km long tracking session to picturesque Jalimukh on India Bhutan international border. Sonali Chouhan,a student of Kalaigaon Girls HS was too happy to participate in the tracking.She along with her friends expressed happiness at the programme.Talking to this correspondent,she said that it had been a never before experience for them and they would work for the conservation of nature and wildlife in future.