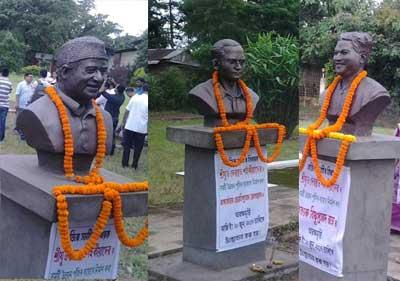 On the occasion of 48th death anniversary of Kalaguru Brishnu Prashad Rabha on Tuesday, Rava Divas was observed in different places of Nazira region.

Statues of three icones of the Assamese society unveiled - KalaguruBrishnu Prashad Rabha, Rup Konwar Jyoti Prasad Agarwala and Sudhakantha Bhupen Hazarika - were built in the  bank of the Dikhow river. In this connection and remembering the Rabha Divas a public meeting were held on last 20th June,  where MLA of Nazira Debobrate Saikia, ex Minister Hemoprova Saikia, senior journalist Vashkar Borgohain etc were present a long with other signatories.

25 Sep 2010 - 5:23pm | Anup Arandhara
A 15-members joint peace committee between the residents of boder areas of Assam and Nagaland was formed at a public meeting held at Hingibeel Bazar on September 24. The people and...