The incessant rainfall for the past couple of days have thrown life out of gear in the town and it's surrounding places. Continuous downpour which is likely to continue for next few days as per weather forecast has caused incoveniance in the form of waterlogging in various localities. The town which is surrounded by tea gardens and the region falling under high lying region is not likely to witness any flood like situation, however waterlogging and flashfloods in several localities have made Hospital road of Ward No. 3 slushy and unhygenic. The dilapidated bazaarkhola road leading from Tangla Charali Police point to Deur Path is also slushy and has made commuters life difficult.. People mostly are preferring to remain indoors and sipping coffee and tea along with their peers and family members. 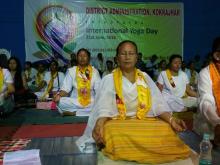 21 Jun 2016 - 6:34pm | AT Kokrajhar Bureau
Despite heavy rain since early morning, peoples from all walks of life throng to participate in the Second International Yoga Day celebration in Kokrajhar, heart of BTAD administration, was...

15 Jul 2014 - 10:34am | Dr Buljit Buragohain
A workshop on "Manuscript Preparation and Painting in Sankari art form" was hed on July 9-13 at Dhing College, Nagaon. The workshop was organised by DEW, a socio-cultural organization of Dhing in...