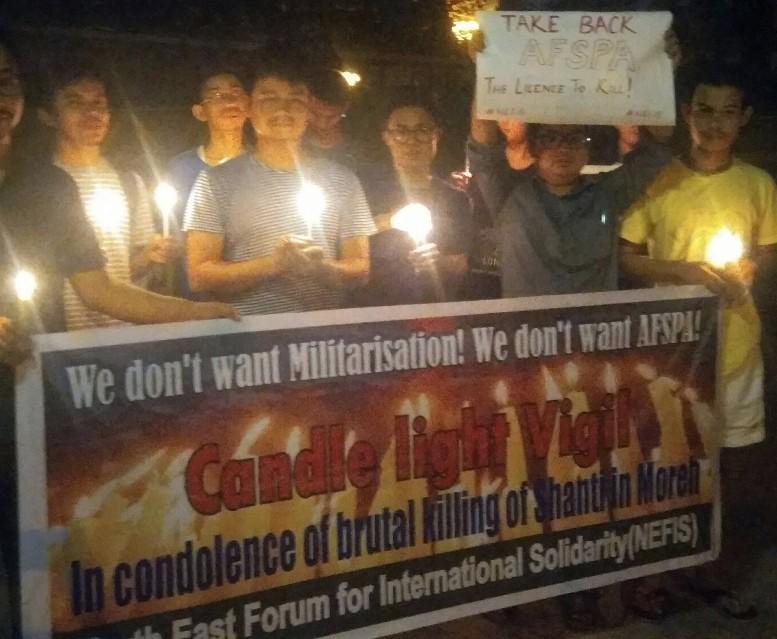 North-East Forum for International Solidarity (NEFIS) held a candle-light vigil in Delhi University on Monday  in condolence for the recent incident of brutal shooting of a woman, Arambam Shanti in Moreh town of Manipur. NEFIS has also submitted a letter addressed to the President of India, demanding investigation of the case by an Independent Probe Team. It should be known that on May 22 at around 4.00 PM in Ward No. 4 Premnagar, Moreh, two masked men on a bike brutally killed Shanti by shooting at her. The shooting took place near an Assam Rifles camp, thereby indicating strong suspicion as to the role of Assam Rifles personnel in the shooting. According to an eyewitness, who does not want to be named, an Assam Rifles Gypsy was seen parked at a very short distance from spot of the killing. It was also pointed out that soon after the incident, some AR personnel came and picked up the empty cartridges lying at the crime scene. Such tampering with crucial evidence before the investigation has not even begun is criminal in itself. Moreover, the intent of the Assam Rifles personnel too is in question, since removal of cartridges from the crime scene suggests their obvious connection with the killing.

The Moreh Police station has drawn up a suo moto case, but investigation into the case has proceeded no further due to criminal influence of the Assam Rifles. Importantly, on the intervening night of 23rd and 24th May, two suspects were let loose without even recording their statements by the Moreh Police, on the intervention of the Commanding Officer of the 11 Assam Rifles stationed at Moreh. This strongly suggests complicity of Assam Rifles with killers of Shanti.

NEFIS has urged the President to take the following action as a matter of urgency:

1. The investigation should be handed over to an independent Investigation Team to ensure that the Assam Rifles’ involvement should be probed thoroughly in a time bound manner, under the direct supervision of your good office.

2. The Assam Rifles station at Moreh should be removed immediately.

NEFIS has also pledged to intensify movement against such killings in North-East in collusion with armed forces, in the coming days.

12 May 2014 - 8:31pm | AT News
Senior Congress leader and MLA Anjan Dutta on Monday dared dissident ministers and parliamentary secretaries to quit immediately.Addressing a press conference in Sivasagar, Dutta said that those who...