An eight members AUIDF delegation expressed grave concern over the plight of the people at a detention camp in Kojrajhar after they visited it recently.

During the recent visit, all eyes were fixed on Rashminara Begum who hailed from Goalpara district who was brought to the detention camp after her name was found in the doubtful voters’ list.

The AIUDF alleged that Rashminara who is a daughter of a freedom fighter has not been receiving proper health care after she gave birth to a baby inside the detention camp.

6 Dec 2013 - 11:39pm | Raktim Baruah
Final day of the TIP Conclave will showcae Star Power session with celebrities come together where they talk about the their role and possibilities to address social issues, especially regarding... 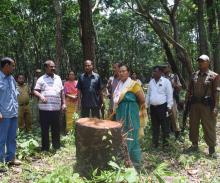