It's hard to believe but true. An award winning  archer in Assam has no option to be an auto driver to survive. Yes, he is none other than Kansai Borgoyari whom the people in his home district Kokrajhar know as an auto driver.

Putting aside differences, people of all walks of like in the BTAD area gave und archer of Batabari Simbargaon a heroic welcome as he came back from the Jharkhand National Games with a gold medal on 2011.

This is apart from many other medals and citations he received during the last twenty years since he started his career in archery from the Sports Authority of India in 2008.

But an abject penury has forced Kansai to keep himself off from the field since he has a family to feed and that’s why, he has no option to drive auto rickshaw for daily income of Rs 300-Rs 400. Nobody from the sports fraternity and from the sports department has visited him to get to know his plight.

But he still wants to concentrate in archery since he has the temperament, said the promising archer adding that the moment he gets a sustainable source of income to feed his family, the moment he would be back to the field.

Kansai said his age did not allow him to join defence. Then what is in store for his life? So he keeps driving auto rickshaw sling the JD Road in Kokrajhar to feed his family. Will the authority come forward?

27 Jan 2014 - 12:16pm | AT News
Assam Congress has agreed to field Bhubneswar Kalita as the first choice candidate for the upcoming Rajjya Sabha polls. But the third choice candidate has yet to be cleared.Chief minister Tarun Gogoi... 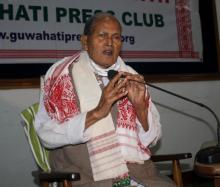 13 Nov 2011 - 10:44pm | editor
Janasewak Janardan Pathak attended as the Guest of the Month program of Guwahati Press Club on Sunday. Born in a remote village of Nalbari district and now a resident of Sariahjan of Karbi Aglong...

6 Jul 2009 - 4:36pm | Juthika Das
The mighty river Beki eroded most of the part of Jania area in Barpeta district. At present it has become a threat to the Jania xatra. About 35 houses have been collapsed. So far 50 villages and...