Why dredging of Brahmaputra?

China is worried over the recent deal to dredge the river Brahmaputra. This was what APW leader Aabhijit Sharma said when he addressed a press conference in Guwahati on Wednesday.

Sharma said the day after the deal was struck, China sought help of ULFA (I) C Paresh Baruah who in turn suggested the Chinese authority to dispatch a team of diplomats for a tact study.

Acting on this suggestion, China is sending a team on April 15 for assessing the situation led by Luo Zhaoul, the Ambassador of China, said Sharma.

He said, “Baruah, who is very much loyal to the China, has also failed to provide proper report to China as he has no proper idea with regard to the future impact of the said agreement if executed properly.”

11 Feb 2018 - 10:41am | AT News
Guwahati: Journalists’ Forum Assam (JFA) expresses sorrow over the demises of two journalists in the last few days and urged the government to sanction financial assistances to the bereaved families... 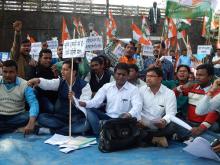