“The company of students are the driving force of my life and teachers are a kind of psychiatrist as dealing with scores of students they become acquainted with human psychology” said Professor Rabindra Kr. Sarmah the outgoing HOD of English, Tangla College on his farewell ceremony on Wednesday.

The farewell meeting was held at the Department of English of Tangla College which was chaired by Professor Jayanta Kr. Chakravorty,Associate Professor of the dept.

In the meeting, Prof. Shubra Ghosh  and Prof. Chakravorty recalling  34 years of meritorious service life of Prof. Rabindra Kr. Sarmah become nostalgic. "The sincerity and dedication of Sarmah towards his service life will remain a inspiration for us", the speakers said.

The students also delivered words on the ocassion. The students and teachers feted the outgoing HOD with phulam gamosa,japi,bouquets and packets of gifts as a token of love and appreciation. The programme was lively with performances of students.

Prof.Rabindra Kr. Sarmah who joined Tangla College in the year 1984 had previously served Sipajhar College,Goreswar College ,LOKD College, Dhekiyajuli and Mangaldai College for a brief stinct of time. Sarmah also has a  collection of poems 'Love Hymns Under the Canopy of Sunshine' published to his credit. 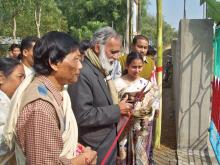 11 Feb 2009 - 4:40am | SK Hasan
Well known NGO Probah has setup a full fledged Children Park at Sukapha, near the burial ground of Ahom kings of Charaideo. The park will provide all round amusement facilities to the Children and...

4 Sep 2017 - 10:30am | AT News Guwahati
The vital issues confronting the state have created no less commotion in the Assam Assembly which begins its session from Monday. The United Opposition is trying to corner the BJP led coalition...