AGP central leadership is facing no less ire in Dhemaji for striking alliance with BJP in the upcoming assembly by polls slated for April 9.

A section of party leaders in the tribal dominated district has been demanding a consensus candidate to contest the polls if the regional party fails to withdraw the alliance.

Despite repeated requested and appeal, the central leadership has left the seat to BJP who is allowing tribal leader Dr Ranoj Pegu to contest.

Two days back, the district party leaders held a talks at Ambari where the leadership refused to read them and allowed BJP to contest. The by poll was necessitated after Pradan Baruah was elected to the Lok Sabha when Sarbananda Sonowal resigned as LS MP from Lakhimpur.

17 Aug 2017 - 2:20pm | AT News Guwahati
A 4.4 magnitude earthquake jolted Nagaland on Thursday striking panic button for many people in the north eastern hills state.  The earthquake, which originated in Zuhenboto district...

14 Oct 2014 - 3:21pm | AT News
Former Chief Minister Prafulla Kumar Mahanta blamed it all on Congress and BJP-led governments at the Centre for the plethora of problems confronting the state for years.In his address at the... 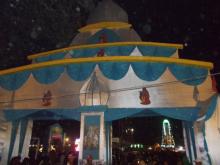