Alternate media users among the practicing journalists of Tripura have taken a pioneering initiative to form an organization named Tripura Web Media Forum (TWMF) with an aim to pursue independent journalism from the alienated region of India.

The launching of the web media forum was initiated with a delegate conference and a dialogue on Web Media – Importance and Challenges on 20 February 2017 at Agartala Press Club. Veteran journalist of the State, Gautam Kar Bhowmik inaugurated the dialogue, where the key note address was delivered by senior journalist Nava Thakuria.

Agartala based senior journalist Pranab Sarkar was honoured with Justice SM Ali Award for Excellence in Journalism 2017 in the function. Syed Sajjad Ali, chief advisor of TWMF and Thakuria, who is the secretary of Journalists’ Forum Assam and Guwahati Press Club, handed over the award to Sarkar.

In his acceptance speech, Sarkar appreciated the forum for its endeavour and expressed happiness in receiving the award instituted in affectionate remembrance of Justice SM Ali, who was the first judicial officer from Tripura in Gauhati High Court, erstwhile the higher court for all northeastern States.

A tiny State of the region bordering Bangladesh, Tripura supports over 30 daily newspapers, few cable television channels and many news portals, mostly in Bengali with English and Kokborok language, where thousands are involved professionally. The State with an area of 10,492 sq km and population of 3.66 million (2012) has wide readership of print media outlets.

Presided over by the Tripura Chamber of Commerce & Industry chief ML Debnath, the dialogue witnessed vivid participations by the media persons in response to Thakuria’s point of views on the alternate media. He termed it is the era of alternate media and the mainstream media outlets should (must) understand and reorganize to face the potential threats from the web media.

“There is no denying fact that the limitation, partiality and often biasness adopted by a section of mainstream newspaper and news channels have paved the way for the alternate media to grow in a faster pace. However, the web media is still lacking the credibility and it may need few more years to emerge the alternate media as a trusted medium,” said Thakuria.

An extensive user for the alternate media, Thakuria also pointed out that ‘today we are now living in a world of journalists as the number of citizen scribes has increased because of easy web access’. He however asserted that the committed journalist with professionalism would always remain the leader.

Thakuria also asked the young journalists to go for in-depth and analytical reports rather than merely reporting an event or incident. He also opined that a northeastern forum or even a national forum of web journalists is the need of the hour to deal with the growing influence and challenges faced by the new medium of mass communication.ce of many eminent media persons of the State.

7 Apr 2013 - 7:32pm | Anup Biswas
In a joint operation by Police and 25 Assam Riffle huge caches of arms and ammunition was recovered 150 mt from railway track near Nutan Basti, Haflong at about 7 pm on Saturday. The recoveries... 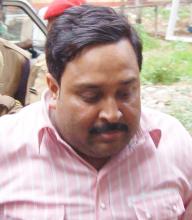