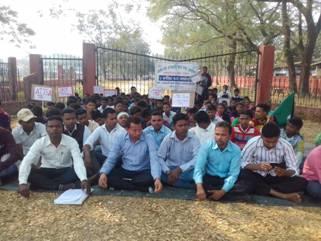 The Assam Tea Tribe Students’ Association Udalguri district Committee arranged a 2 hours picketing program in front of the Deputy Commissioner  of Udalguri district on the 14th instant and demanded through their memorandum for permanent settlement and rehabilitation of landless tea tribe families and settlement of their land those which has been being occupied by the tea tribe families since a long time, to implement Plantation Labour Act 1951 in all tea estates of Assam, to issue national food security scheme to all tea workers of Assam, Status of water supply, Sanitation and Hygiene practices among the tea garden population of Assam, to provincialize tea estate primary schools and to increase student-teacher ratio in the estates.

The students' union said despite repeated pleas to Dispur to provide land pattas for the tea tribes, it is still a distant dream. "We have been fighting for land pattas for over two decades. But nothing has been done despite several assurances from the government,'' alleged Kailash Gorh, central executive, Udalguri unit  of the association.

The union demanded that the state government immediately allot two bighas for every tea tribe household. "Our agitation will continue until our demands are fulfilled. We urge the BJP-led government to immediately provide land pattas to our people,'' said Biren Kisan, Secretary, Udalguri district committee, ATTSA .

Amit Tanti, BTC Regional Secretary said the BJP government at the Centre should also speed up the process for granting Scheduled Tribe (ST) status to the community. "In the gardens, our people lack electricity in their homes and adequate potable water. We ask the government to provide these facilities at the earliest," he said. The union urged the government to stop exploitation and work for the tea garden community. "The community, which has been living in Assam for the last three decades, has been neglected. We demand equal rights in Assam.

1 Sep 2012 - 3:39am | editor
The Asom Gana Prishad on Friday demanded Prime Minister's intervention to make an end to the bloodbath bath in BTAD areas and Dhubri. Party leader who took out a procession from Ambari on Friday,...