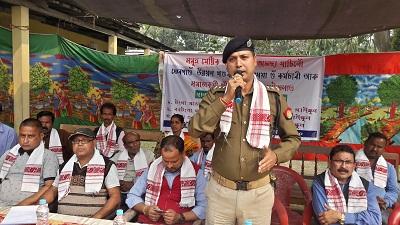 The Bhergaon Development Block in co-ordination with social worker Dipen Das (Toppa) held a blessing prayer for candidates of HSLC Examination, 2017 from 6 high schools of the town.

Pranjal Borah SDPO Bhergaon gave the motivation and job criteria speech in the function while Lakhya Jyoti Das Khoirabari revenue circle officer spoke about the importance of HSLC Exam and encouraged the students and urged them to work hard and establish their identity in different spheres.

The students were besides tipped with skills for scoring better marks and good co-ordination of time.  They were also distributed with exam boards and pen as a token of love and encouragement.

Bhaskar Baruah ,Bhaben Swargiary ,Satyen Biswas JE of Bhergaon Dev. Block along with Prof. Ashim Roy and teachers of Vivekananda High School motivated the students and  blessed  the candidates to excel in the upcoming HSLC examination .

Silchar buckles up to celebrate International day for Disaster Reduction

10 Oct 2017 - 10:30pm | Siddharth Deb
The State Disaster Response Force (SDRF) of Cachar district is all set to celebrate the International day for Disaster Reduction to be held on Friday, October 13. An elaborate program has been...