Basumatary,was proprietor of Bodosa,a daily Bodo newspaper published from Kokrajhar,was died on December 29 in 2015 after prolong illness.He was founder president of Kokrajhar Press Club and hold adviser of the club till his death.

Press Club members aid rich floral tribute to late Basumatary and recalled his contribution towards journalism in BTAD region and it’s adjoining districts, on his death anniversary, was jointly organized by KPC and Bodosa,daily newspaper.One minute silence of condolence was also organized to mark the observation. 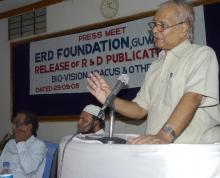 20 Mar 2014 - 4:56pm | AT News
Tezpur Congress leader Mani Kumar Subba will fight as an independent candidate.  Subba is believed to have been preparing to file his nomination on Friday.The former Congress MP from Tezpur on...

Lifer for 4 by Udalguri Court

12 Dec 2015 - 10:49am | Shajid Khan
The District and Sessions court of Udalguri on Friday sentenced four persons, including a women who were accused in a murder of a farmer at Dimakuchi under Panery police station in Udalguri district...