Senior Assam Public Service Commission member Ranjit Barthakur will head the autonomous body after Chairman Rakesh Paul was sent to jail for his alleged involvement in the cash for selection scam.
Barthakur, the senior member of the commission has been promoted after the authorities gave the required consent. Barthakur’s tenure is set to end after six months.
Notably, sitting chairman Rakesh Paul has been removed after he was arrested along with a few others including a member. 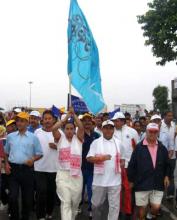 4 Sep 2008 - 2:07am | Nanda Kirati Dewan
Leading weightlifter of the country Monika Devi from Manipur, the chief guest in the silver jubilee edition of the Abhiruchi Sports Day which is celebrated all over the State today flagged off mass...