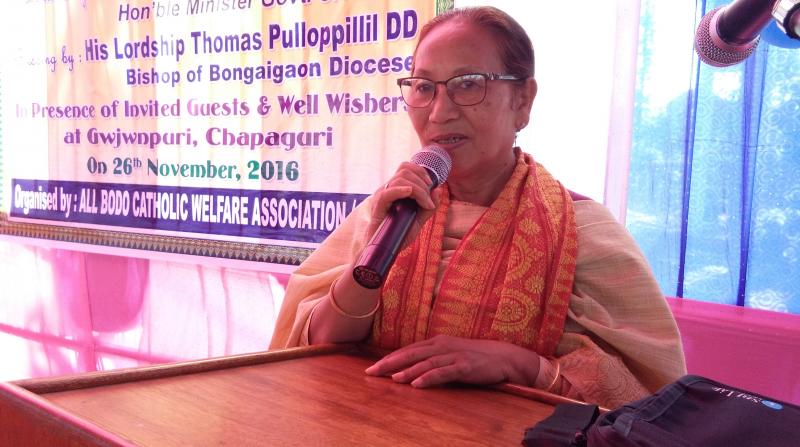 Assam Forest minister Pramila Rani Brahma has announced compensation to the victims by man-elephants conflicts when she inaugurated the newly constructed Zubi Rest House at Gwjwnpuri Chapaguri by All Boro Catholic Welfare Association in Chirang district on Saturday.

Brahma while talking with this correspondent said that government is very much concern with growing men and elephant conflict in the state. She said wild animals are coming out tic the human populated areas in search for foods because this season is totally dry. She said wild animals are losing their habitation due to encroach along forest lands in the state, so conflict are occurring in the region.

Brahma said that forest department has been taking stern step to check men-elephant conflicts and affected victims who are facing damage of properties and victims would be given compensation .

She said forest department is stepping with strong measure while checking illegally encroach and poachers in the state.She said forest wealth and wild lives be protected and for this concern departmental officials instructed to work with strength.

Brahma lauded the demonetisation initiative taken from PM Narendra Modi in the country said it is good gesture to check black money. She expressed her hopeful that demonetisation step is creating financial healthy status for the country. Brahma inaugurates the newly constructed Zubi Rest House, constructed by All Boro Catholic Welfare Association at Gwjwnpuri Chapaguri in Chirang district in the presence of huge publics. She said that the Rest House will give healthy stay for guests in the region.

9 Jul 2015 - 9:35am | AT News
Microfinance: providing financial services for small businesses or entrepreneurs, especially in poor or rural communities, who do not have access to traditional banking or financial services. Sounds...

20 Jan 2011 - 4:22pm | Jayanta Kumar Das
The 50th National Bodo Sahitya Sabha has bebun at Udalguri from January 19 with four days programme.The ceremony has begun with the opening of the Lankeswar Brahma memorial main gate by Rihan...