Highway collision kills one, injures another

A severe accident occurred Thursday when a new KTM Duke bike and a Tata Sumo collided head-on on NH127 in Barpeta district leaving one dead on the spot and another seriousy injured.

Two boys were reported speeding on the Pathsala-Bhutan highway when they collided near a Kali Mandir with a Tata Sumo coming from the opposite direction. Both vehicles instantly caught fire. Pathsala police along with fire fighters tended the fire after a while.

The deceased identified as Biki Nayak, aged 27 is the son of Jitu Nayak and Indira Nayak, while the injured admitted at the Swahid Madan Rawta Bajali subdivisonal hospital was sent for further management to a hospital in Guwahati. The speeding duo were from Kurobaha in Barpeta district.

Locals confirmed several accidents in the area and were of the opinion that commuters should exercise caution and follow speed limits while on a highway.

sent the body of the deceased to the Fakhruddin Ali Ahmed Medical College in Barpeta for post mortem and other formalities before cremation.

13 Jul 2015 - 5:30pm | AT News
All of sudden a busy road in Guwahati started teeming with people in the morning. Vehicles stopped plying on the road. A huge crowd blocked the road for not less 30 minutes. Policemen were off from... 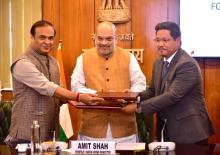 29 Mar 2022 - 8:37pm | AT News
New Delhi: Assam and Meghalaya claimed to have settled an interstate border dispute in 6 places at a meeting of Chief Ministers with the Union's home minister in New Delhi on Tuesday. The...