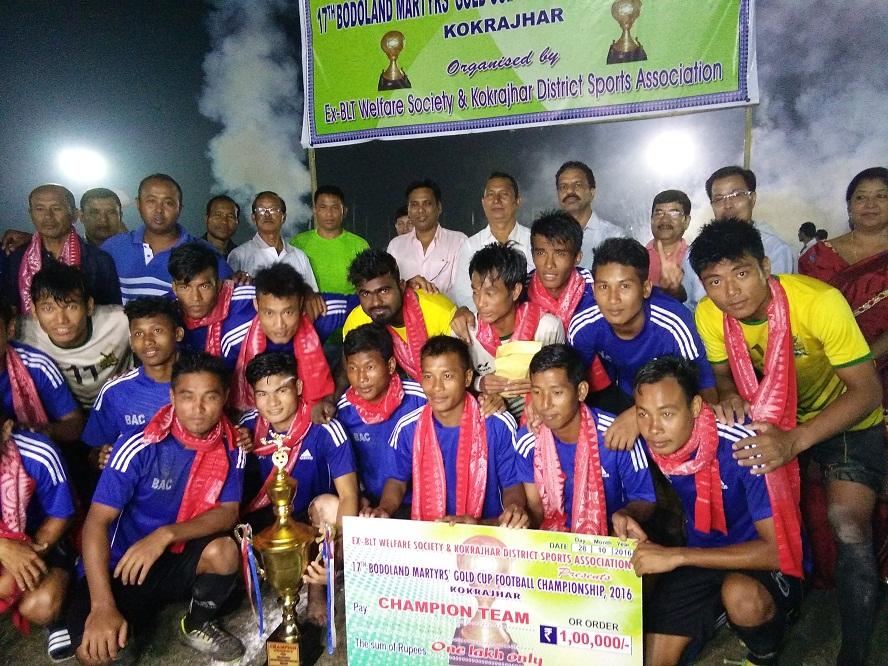 Barhoongkha Athletic Club, Kokrajhar defeated Salbagan Football Club, Gossaigaon 1-0 in the final match to lift 17th Bodoland Martyrs Gold Cup football championship being played at KDSA ground on Friday evening in Kokrajhar district. For Barhoongkha,Dwimalu Brahma netted lone goal in 66 minutes against Salbagan in second half which led the team win the championship. Isak Sangma of Salbagan and Sheik Arshad of Barhoongkha were sent off in 68 minutes due to fouls during the match.

The championship has been organised to recall Bodoland martyrs,who sacrifice their lives during Bodoland movement for the cause of separate Bodoland state, was organised by Ex-BLT welfare society and Kokrajhar District Sports Association.Kampa Borgoyary,BTC Deputy Chief inaugurated the match in the huge spectators,which was organised by falsh lights for the first time ever in Kokrajhar. Dwimalu Brahma of barhoongkha was adjsuted as best player,was awarded cash 5,000 and a trophy. BTC executive member Doneswar Goyary handed over cash 1,00,000 and a trophy to the championship team while Dr LR Bishnoi,ADGP(BTAD) gave away cash 50,000 and a trophy to the runners-up team.BTC executive member Rajib Brahma,Proneeta Swargiyary,DID winner,Kunchok Tenpa,mountainer were prominent attendees among others in the prize distribution function.

Firing in Itanagar before PMÃ¢â‚¬â„¢s visit

31 Jan 2008 - 4:28am | editor
Despite a mammoth security arrangement before the Prime Minister’s visit to Itanagar, a shoot out incident has rattled the state capital on Thursday morning. The firing incident that took place...