An agent of Fair Price Shop of Sonapani village under Panery PS of Udalguri district had to face the fierce of irate villagers when the PDS priority scheme rice meant to distributed to villagers was sold in open market.

Reportedly Gokul Deka the agent of the fair price shop sold 50 kg PDS rice to one Jabla Boro whereas he was entitled for 35 kg rice. The villagers on suspicion interrogated Jabla and learned that the agent had sold an additional 15 kg rice at higher price. The irate villagers handed over the rice and the bearer Jabla Boro to Panery PS. On behalf of the villagers Dharma Das also lodged an F.I.R against the accused agent Gokul Deka.

The Panery Police has registered an F.I.R vide case no. 66/16 against the agent accusing him of selling PDS rice meant in open market . Talking to This correspondent Panery PS OC Sohrab Ali said"We have registered the F.I.R and are investigating the matter."

Meanwhile the accused agent Gokul Deka has been issued notice to appear before the Panery Police within a time period of seven days. The local villagers also accused the agent of selling fair price shop goods in black markets for long there by amassing unaccounted wealth. The villagers demanded cancellation of fair price shop licence of the accused. Now what step does Police and Bhergaon Food Civil Supply and Consumer Affair department adopts will be something to watch out for. 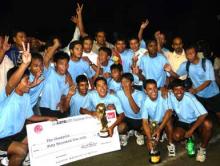 Swine flu toll goes up to 4

15 Mar 2015 - 11:58pm | AT News
The killer wine flu has claimed two more lives in the state creating panic among the people these days.The reports of fresh deaths came from Jorhat district where two other people have been...