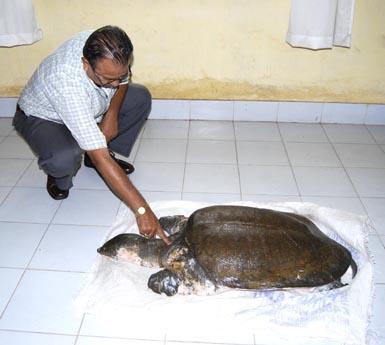 In a land of flora and fauna and where even animals both wild and aquatic are worshiped, this news would come as surprise to you. Turtles at the Hargrib Madhav Temple, Hajo at the outskirts of Guwahati city which are worshiped as a incarnation of a Hindu god is threatened to death by the devotees and local people. Reports came in Assam Times Guwahati correspondent that a turtle was brought from the temple's pond today afternoon at the Assam State Zoo cum Botanical Garden for postmortem after the turtle was found to be dead in mysterious condition. Media persons thronged and animal lovers crowded the daed turtle at the zoo. On questioned an attendant at the Zoo informed that it is suspicious that the turtle lost its life due to pollution in its habitat. The water body where this had lived must have been polluted that caused its life. The zoo official was of the opinion that if our doubt proves to be true it is very necessary to translocate the other turtles of the pond to a safe habitat. Postmortem reports and details of findings are awaited.