Assam Chief Minister Sarbananda Sonowal has promised to seal the entire Indo-Bangla border to permanently avoid the decade old trans border crimes. But he said that lots needs to be done to address the issue. This was what he said in a statement issued as he was on visit the porous Indo-Bangla border from Friday.

Accompanied by AASU leaders, Sonowal toured Dewaner Alga under Hasichar Border Outpost on Friday and said that inclusive steps are required on war footing manner to seal the porous border. In his statement, he said, ““We also seek cooperation from all sections of the people to fortify our international borders, including Karimganj, and create a protective shield against all cross-border movements like smuggling,” he said

15 Jul 2012 - 9:54pm | editor
Police have captured the main culprit in the sensational molestation case in Guwahati that rattles the entire country. Identified as Amarjyoti Kalita, the suspended employee with Amtron was held from... 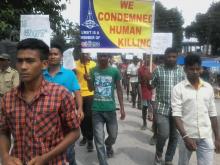