Kerala defeated Goa 2-1 sets in the premier league, was organized jointly by All Bodo Youth Sports Association and All Assam Tchoukball Association with three-day programme scheduled.Madhav Prasad Sarma,Kokrajhar Deputy Commissioner gave way cash one lakh and trophy to championship team while Shyamal Prasad Saikia,SP Kokrajhar handed over cash 75 thousand and trophy to runners up team. A total of eight states of the country are participated the Premier League, included Maharastra, Uttar Pradesh, Uttarakhand, Delhi, Kerala, Haryana, Goa and Assam. Ashok Goyary,Secretary Organizing Committee and Ajay Singh, Secretary of Indian Tchoukball Federation told that it was a first ever premier league in the country, which is being organized at Kokrajhar of BTAD in Assam.

The league was successfully concluded with smooth and healthy environment as spectators enjoyed the games. Participants expressed their happy over the conduct of games in healthy successfully manner.

7 Feb 2010 - 9:49pm | editor
Two boys were feared to have dead when they fell from a boat on the river Brahmaputra on Sunday. According to information, the incident took place at Sunsali to have a picnic party of 7 Class IX... 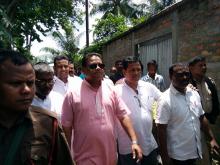 Anup Chetia 4 others to be extradited to India

9 Jul 2008 - 4:21am | editor
Anup Chetia & 4 others of ULFA who are currently jailed in Bangladesh are to be handed over to India within this month, according to Assam Police sources. Details awaited.