The court of the Additional District and Sessions Judge, Darrang on Saturday awarded rigorous imprisonment to one Nabi Hussain(50) of village Silbori under Dalgaon Police Station for brutally killing one of his neighbours Firoz Ali and then burying the dead body in an attempt to conceal evidence. The judge Thaneswar Kalita also imposed a fine of Rs. 25000 against Nabi in default of which the convict will have to undergo rigorous imprisonment for a term of another one year. According to the police records,Firoz Ali was murdered with sharp weapons on June 22,2003 after which Samsul Hoque son of Late Firoz Ali lodged a police complaint stating that his father was brutally killed by Nabi Hussain,Noor Hussain and Younis Ali following a long standing land dispute between their families.On the basis of the F.I.R the police after three years arrested the all three accused and sent them to jail. The court after going through the evidence found Nabi Hussain guilty and convicted him for life term imprisonment. However the other two accused were acquitted due to lack of sufficient witness and evidence.

24 Jan 2014 - 1:58pm | AT News
Security forces are spreading tentacles in the nook and corner of the state to flush out ULFA, KLO and NDFB militants in the run up the Republic Day.Guwahati turns into a security fortress with... 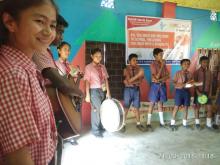 RAISE rings the bell in Tripura

30 Mar 2018 - 8:04am | AT News
PRASENJIT SAHAAGARTALA: March 21, 2018 will be a historic day for Tripura. Courtesy Regional Action for Inclusive Education North-East (RAISE-North East). The organization along with a few selected...