President Pranab Mukherjee has cleared the name of the former Congress veteran and now BJP leader on Wednesday. Gauhati High Court Chief Justice will soon administer him the oath of office and secrecy at function in Raj Bhawan.

The veteran Congress leader from Nagapur was elected to the Lok Sabha. But in 1996 he was re elected as BJP candidate. In 2009 also he contest the Lok Sabha polls. But he was defeated.

23 Mar 2014 - 9:04am | AT News
AGP steering committee failed to take any clear cut decision to withdraw the withdrawal of suspension against Padma Hazarika on Saturday.Chaired by president Prafulla Kumar Mahanta, the meeting took... 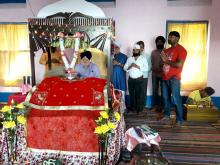 4 Nov 2017 - 10:27pm | Shajid Khan
Along with the rest of the state Guru Nanak Jayanti was also celebrated with religious fervour here at Sri Guru Singh Sabha Guruduwara,Tangla on Saturday . Devotees from entire Darrang and Udalguri...

Set up AIIMS in Golaghat: Gaurav

5 Aug 2014 - 8:03am | AT News
Koliabor MP Gaurav Gogoi has demanded an All India Institute of Medical Science in Golaghat. In his speech in the Lok Sabha on Monday, Gogoi said that the premier medical institute would be a...