A peace meeting was held at the conference hall of Kokrajhar Deputy Commissioner here on Tuesday.

The meeting apprise about the prevailing law and order situation following the attack at Balajan Tinali market on Friday last where 14 people died and 18 others were injured.

The DC called upon all to maintain peace and harmony and also help the administration to maintain a peaceful atmosphere.He said district administration and state government has been initiating stern measures into situation. Government handed over ex gratia yo victims family member and given away financial supports to injured persons who are taking treatment in different hospitals, Sarma added.

The meeting was also attended by Kokrajhar  Superintendent of police Shyamal Prasad Saikia.
Saikia said the attack at Balajan Tinali was carried out by a single individual and no group is involved.  He said the militant who carried out the attack was heavily drunk and fired indiscriminately at the market place before he was gunned down, he added.

12 Feb 2014 - 10:36pm | AT News
A senior police officer among 10 other securitymen have been injured in Cachar after they clashed with a group of protesters on the Silchar-Mizoram road on Wednesday.The incident took place at... 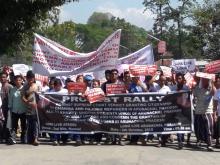 Williamnagar gearing up for X-mas

21 Dec 2015 - 10:32pm | Prosper Marak
William Nagar in Tura is gearing up for the Christmas festival which falls from December 24. The entire area along with other places across Meghalaya seems to have dressed afresh. A songchristian...