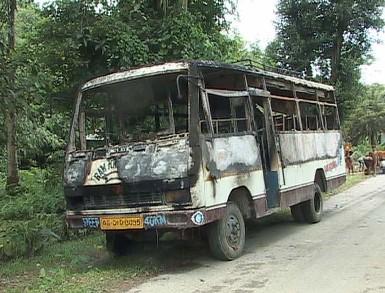 An uneasy situation is prevailing in Dhubri district for a string of untoward incidents that took place when All Koch Rajbanshi Students Union was running its 1000 hour economic blockade in the lower Assam district. The situation turned grave on Monday when a 609 canter was torched at Kumarganj on the Dhubri- Kachugaon Road under Gookganj police station of Dhubri district on its way to Gossaigaon by a few suspected Akrsu activists.

According to information, all the passengers were asked to get down before the miscreants torched the bus by splashing kerosene oil. Passengers inside the bus ran away. Police team rushed to the spot but the vehicle was completely gutted by the then. Police and security forces have been deployed in the area the death of a Akrsu activist at khogarpur in Bongaigaon district by a speeding Tata-victa on Saturday.

Meanwhile, a few trucks carrying essential goods are plying under the heavy police escorts on the NH 31 and 31 ( C ) while all kinds of private passenger buses and cars are off the roads.

24 Mar 2013 - 8:34pm | SK Hasan
Vetern social worker and ex. Vice Chairman of Nazira Municipal Board Md. Ali Hassan daied after a prolong illness at his own residence of Nazira on March 23. He was 65. He survived by his wife, 2...