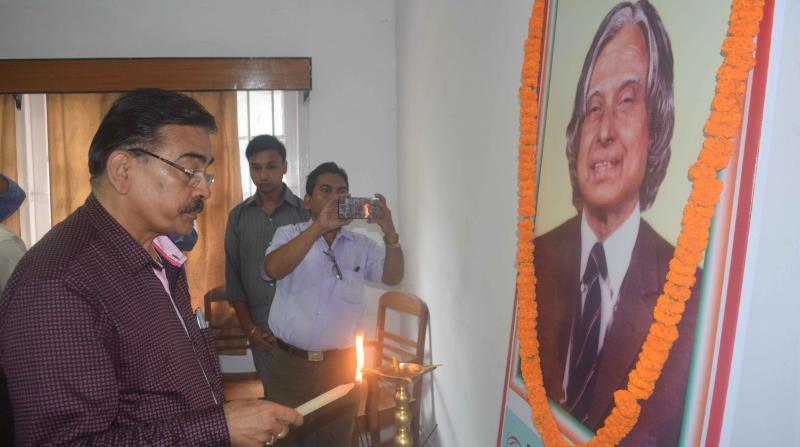 Kokrajhar and Chirang district administration recalled contributions of Dr APJ Abdul Kalam, former President of India on his first death anniversary being observed across the country on Wednesday.

Kokrajhar district administration observed the day with paying floral tribute to Dr Kalam at DC office conference hall. Madhav Prasad Sarma, DC Kokrajhar recalling Dr Kalam said that Kalam was regarded as missile man, besides holding of President of India. He had a good status in his life for his leadership in the field of Science and Technology through which India achieved successful step in scientific arena.

'We must keep alive philosophy and ideology of Dr Kalam to make India a successful country in the world', Sarma added.

Chirang district administration observed the death anniversary of former President of India Dr Kalam, who was popularly known as 'Missile Man' and 'People's President' in the conference hall of the DC's office. In the meeting, the members present paid floral tribute to the portrait of Dr. Kalam and observed one minute silence praying to the almighty for the great soul.

A meeting was also held under the presidenship of ADC and Incharge Deputy Commissioner Dasarath Das and discussed elaborately about his life and works especially in the field of science and technology. Among others, NRC District Resource Person Manash Baruah, Election Officer Rajeev Das, IS Jaypal Sing Brahma, DEEO Bhaben Deori were prominent attendees on the occasion.

Forgery by financial institution at Sivasagar

20 Jan 2012 - 4:02am | Anup Arandhara
Now of complains of forgery are raising against many financial institutions, working in our state. At the same time the consumers raise the same complain against the financial Institution, “...

26 Jul 2013 - 6:52pm | Jayanta Kumar Das
There is a scientist hidden in every child and it should be our utmost duty to discover him by working heart and soul. This was the view of Thaneswar Malakar, deputy commissioner of Udalguri district...

25 Oct 2015 - 4:10pm | AT News Itanagar
The All Nyishi Youth Association has deferred its proposed 24 hr capital bandh on Monday. The bandh will take place on November 9.Addressing the media persons at Arunachal Press Club on Saturday,...