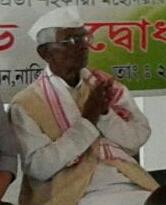 Freedom fighter, president of Nazira District Freedom Fighters Association and veteran Congress leader Subha Gogoi breathed his last at his residence at Mazenga on Thursday. He was 95 and survived by his wife and three sons.

21 Jun 2015 - 11:36am | AT News
Assam joined International Yoga Day with mass participating across the state on Sunday.People thronged in thousands early in the morning at the Sarusajai Indoor Stadium to participate in the event at...