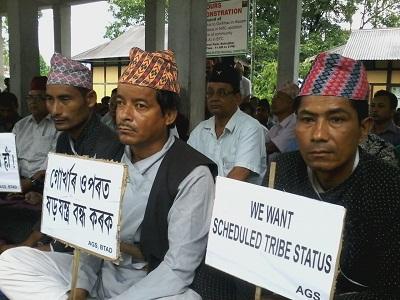 Agitators with banner,placards,fetoone participated the demonstration and shouted slogans demanding early granting ST status,OI status in NRC update, which was organized by Assam Gorka Sammelan, BTAD regional committee. The agitators voice sky wave with shoutings-‘No ST No Rest’, Gorkhas should be regarded as OI citizens in Assam nominate a member from Gorkha community in BTC council. The Sammelan submitted a memorandum to Chief Minister through Deputy Commissioner, Kokrajhar seeking early ST status to Gorkha community in Assam. The Sammelan warn to take vigorous mass agitation if their demands are not meet as early in coming days.

Laksmhi Sedai,president of the Sammelan told that the Grokahs are indigenous peoples of the state with own culture, identity and language because Gorkhas have been dwelling peacefully in Assam since time of immemorial as defense personnel, a few government officials and academicians, cattle breeders etc in all spheres of Assam. He has demanded the Gorkhas should get early ST status to meet healthy development I the state. He expressed serious concern over tactically non granting OI status to Gorkha community in NRC update in Assam, besides keeping community on confusion with marking non-original inhabitants.

“We started our agitation from Kokrajhar to the cause of ST status, OI in NRC update, nomination of a member from Gorkha in BTC council. We put demands to the higher authority and government to meet early fulfillment,other wise mass agitation will be initiated in days to coming. Government deprived Gorkha community from all fronts of development as well ST status since long years back. The government should take stern measure to fulfill community’s issues and aspects”,Sedai said.

It is my pride, to read the

Permalink Submitted by Rup Subedi on Fri, 28/10/2016 - 05:38
It is my pride, to read the above article which is appreciated. Gorkhas are the key element for peace and prosperity of the soil. Even though, they are still struggling for their identification and their own home land. Each Gorkha has to be motivated, through a spirit of friendship and mutual understanding among themselves and communities around. In addition, walk together and work together to reach to great destination with a fruitful result. I would say, peace does whatever we want. So much thanks to my dear brothers and sisters.

18 Sep 2008 - 5:55pm | editor
Altogether 20 people have been injured, three of them critically, when suspected ULFA militants exploded a powerful bomb in Bijni in Chirang district of lower Assam. According to information, the...

11 Aug 2012 - 4:20am | editor
There is no rift in the state cabinet on the ethnic clashes in BTAD. This was simply what AICC General Secretary Digvijay Singh said on Friday. Addressing a press conference in Guwahati, Singh said...