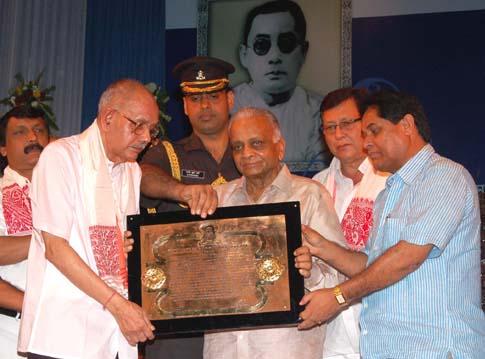 His Excellency Governor of Assam Shri Shiv Charan Mathur today presented the prestigious visionary KK Handique Memorial Award 2008 to former Vice Chancellor of Dibrugarh University and Sanskrit Scholar and renown philanthropist Prof. Mukunda Mhadhav Sharma at Rabindra Bhawan in Guwahati in presence of Gautam Bora Minister for Cultural Affairs, Prof Okhil Kumar Medhi VC Gauhati University, Prof. Swaraj Basu Director Distance Education Council IGNOU NewDelhi and Prof. Srinath Baruah VC KK Handique State Open University and other officials and dignitaries of Cultural Affairs Govt,. of Assam. In absence of Chief Minister Tarun Gogoi, press advisor to CM Mr. Devo Prasad Baruah read out the message of the CM who was consented to attend this function as the Chief Guest. B K Handique Union Minister who is also the son of KK Handique sent a message to the august gathering who failed to be in Guwhati due to parliamentary affairs.

The award this year was initiated by Cultural Affairs Govt. of Assam while previous two years it was given by KK Handique Memorial Trust. All the speakers echoed in same voice the greatness of the visionary man and recalled his contribution to the society. Today on his 110th birth anniversary 2nd anniversary of the KK Handique State Open University was also celebrated in the same function. A newsletter titled "Horizon" was released by minister Gautam Bora. Mr. Swaraj Basu Director Distance Education Council IGNOU New Delhi elaborately spoke on the importance and necessity of distance education. He cited examples of students clearing UPSC examinations and who are into administrative systems those who were alumni of distance education wing. He emphasized on the general people to recognize degree by distance education wing and open universities. He quoted text from the deliberation of Krishna Kanta Handique that he had made from time to time in various convocation in India and abroad. Founder VC of Gauhati University and founder principal JB College Jorhat Padma Bhusan KK Handique was a renowned scholar of his age even his ideologies today has impact on the society.

Recipient of KK Handique Memorial Award 2008, former Vice Chancellor of Dibrugarh University and Sanskrit Scholar and renown philanthropist and eminent indologists Prof. Mukunda Mhadhav Sharma being in a unhealthy state his daughter addressed on his behalf. He gratefully acknowledged the award and thanked the people for their love and support. He too recalled the contributions of KK Handique. Previously this award was given to two educationist Prof. N Dandlekar and Prof. R N Sharma.

20 Oct 2014 - 7:58am | AT News
Hardly one and half year is left for the assembly polls.  The All India United Democratic Front (AIUDF) is gearing up for the show. Now its time for formulate strategies to steal the march.This...

Border market on the boil

13 Jul 2015 - 8:09pm | AT News
An uneasy situation prevails in Byrnihat along the Assam-Meghalaya border when an irate mob set on fire a market on Monday.Security forces are patrolling on the road apprehending any recurrence of...