Atleast Six footballers were shortlisted in the highly skilled and talented U-15 footballers(boys) selection camp held at SAG SAI ground in Kokrajar district on Thursday. The selection camp was organised by the Tata Trusts, Mumbai under the Football Development programme and partnership with U Sports (Mumbai) and Germany. Over 120 budding players from different districts of BTAD and adjoining areas took part in the selection camp and among them six players were shortlisted by the organisers on the ground where Fabian Ewertz, Coach/Scout, Nikhil,official from U Sports/U Dream football,Chanini Lokho, Senior programme manager, Tata Trust, Guwahati attended to check skilled and talented players.It was organised under a premier collaborative football training programme (called as U Dream Football),which has been designed to help talented young Indian footballers to prepare out to pursue a career in professional football across the world.

Selected footballers will undergo 6 years residential programme at Bittburg, Germany for the training under scholarship of covering their entire cost of training, lodging and boarding. The scholarship will be directly provided to the children or with the help of Centre of Microfinance and Livelihood (Guwahati) and North East India Development Agency (Kohima),which are Associate Partners of the Tata Trusts in the North East India.‘Football will definitely be on developing their football skill and talent. But equal focus will be given on their education, so that they can become a educated sports person in their near future’,said an organizer of the selection camp.

J Basumatary,BTC,CHD for sports and youth welfare said that it was a selection camp to select skilled and talented sports person in the area.Huge sports children participated in the camp and organisers expressed their happy with seeing of good response in the region,she said.She also told that selection camps in Imphal has already over and they left for Shillong where a selection camp is bound scheduled. 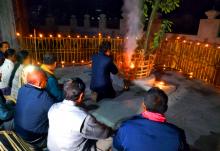 16 Feb 2019 - 6:47pm | AT Kokrajhar Bureau
A Bathou Prayer and candle lighting programme  was organized at Bathou Thansali in Kokrajhar on Saturday evening to offer prayer for CRPF jawans who lost their lives in militants attack at...