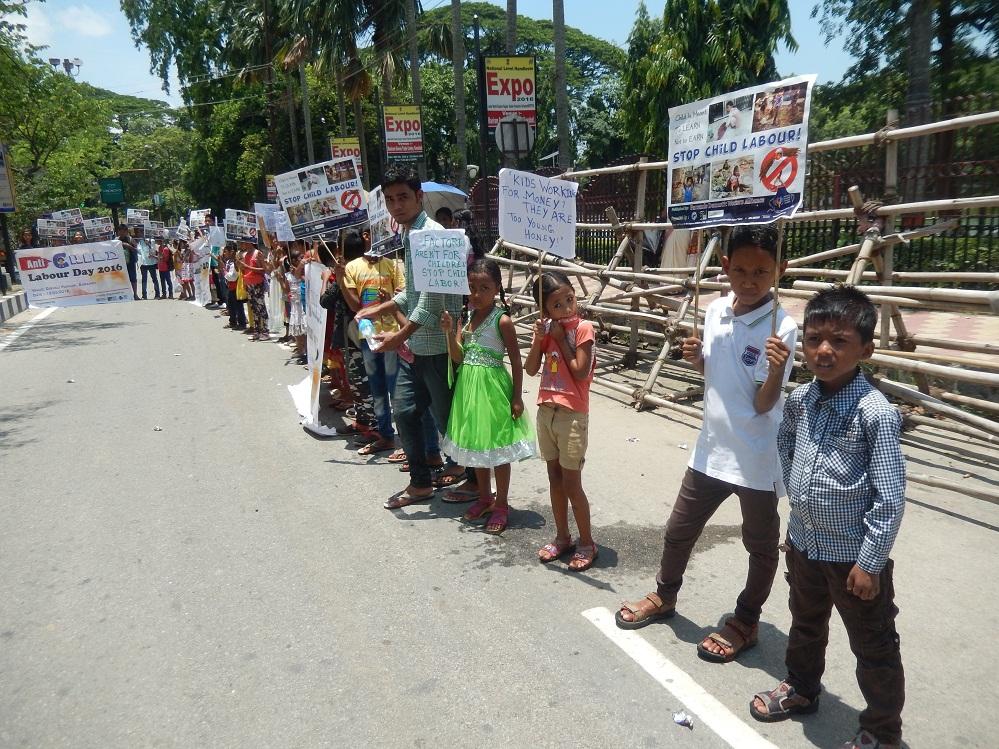 A human chain comprising of around a 100 children raising slogans against child labour was today organized on the occasion of Anti Child Labour Day, by the Centre of Development Initiative (CDI) jointly with the Ferrando Domestic Workers Alliance and National Domestic Workers Movement (NDWM) near Dighali Pukhuri Guwahati on Sunday.

The children mostly belonged to the marginalized families , were school going children, some school drop outs and some children of the domestic workers who were members of the 1000 strong, Children’s parliament and Child Friendly Guwahati (CFG) centres spread across the state.

“The human chain has been orgainsed to attract attention from the people of the city against child labour and rising crime against the children,” said coordinator, Sr. Teresa, CDI.
The human chain is a part of the weeklong awareness campaign to celebrate the International Domestic Workers Day on June 14th which will also see a postcard campaign on June 14th  by the Domestic Workers of the state. This will be followed by a rally by the domestic workers on June 16th.
(Photos attached alongwith)

3 Feb 2014 - 4:14pm | AT News
Amid simmering protest over death in Nido Tani in goon attack in Lajpotnagar, Delhi High Court on Monday issues notices to the Centre and Delhi government asking for the reports.Taking a suo moto...

5 Feb 2008 - 1:46pm | editor
The face of violence atop the North Cachar hills refuses to die down. The Black Widow militants have killed one more people after he was kidnapped from Haflong town on Sunday. According to...