Police have earlier on April 14 arrested four youths-Kwrwmdao Narzary, Surjay Basumatary, Khwmtha Brahma and Ratanjay Basumatary- all between 18-21 age for their link with the NDFB-S militant outfit. Police said the youth, most of whom are doing their higher secondary and colleges collected extortion money on behalf of the NDFB-S organisation and handed to the outfit hardcore cadres identified as Rahul and Dimasa and usually gets Rs 2000-3000 for their job. Police claimed that the youths about 20 in numbers have so far collected around 3-4 lakhs for the militant outfit. 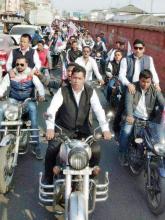 21 Oct 2014 - 9:50am | Chandan Kumar Duarah
When critics find the gross national happiness of idyllic Bhutan being blurred by large-scale unemployment that leads to a deep frustration among the youths making them susceptible to drug and drug-...