As many as 44 illegal arms were seized in the district during the intensified check and search ahead assembly election, besides recovery of 13 grenades and seized 6731 litres of liquors. Madhav Prasad Sarma, Kokrajhar Deputy Commissioner and District election officer exclusively told that there have been 648 license arms deposited, out of issued 743 license arms in the district under the guidelines reached from election commission of India. The flying squads of the election commission has been seized cash Rs.43,23500 in the district, who were carried on the way by different individual and vehicle owners. The flying squad has also able to seized 44 numbers of illegal arms,thirteen grenades, 30 live ammunition, besides seizure of 6741 litres of liquors in the district, Sarma added. 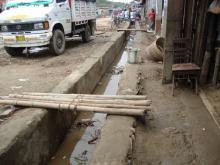 18 Sep 2013 - 3:07pm | AT News
A college girl in Ujanbazar area in Guwahati committed suicide sending shockwaves in the city. Identified as Navanita Chakarbartty, the girl who hailed from Nalbari hanged herself inside her room at...