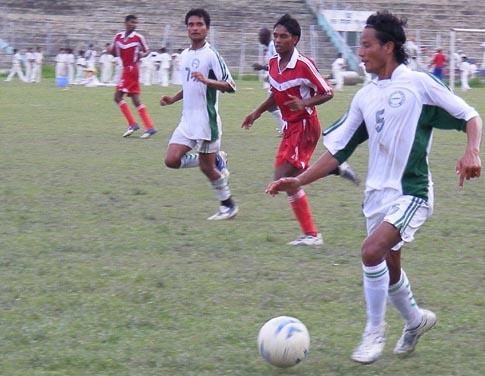 Players of MAHARANA (Red) and GREEN VALLEY (White) seen in action at the 4th NN Bhattacharya Memorial football Tournament organised by Guwahati Sports Association at Nehru Stadium in Guwahati on 10-07-08.

21 Jan 2009 - 5:34pm | editor
The Opposition Asom Gana Parishad (AGP) is holding a brainstorming session in the party headquertars to discuss the poll preparations for the upcoming Lok sabha elections. According to information,...

No evidence of new outfit: ABMSU

5 Aug 2012 - 3:23am | editor
The All Bodoland Minority Students' Union on Saturday denied involvement of a newly formed unit was involved in the recent clashes. The organization said that there was no evidence about it. The...

Death of girl shrouds in mystery

26 Sep 2014 - 9:01am | AT News
HANTIGIRI NARZARY, KOKRAJHAR: The mysterious death of a 16 year old girl creates no less sensation in Chirang district during the last three days.Identified as Pohila Narzary, she was missing since...