Altogether 11 candidates today filed nominations for the state assembly election in Udalguri on Thursday. Among them were Kamali Rani Basumatari , sitting BPF MLA of Panery,sitting BPF MLA Rihon Daimari of Udalguri, and Charan Boro BPF candidate for Mazbat . It was the second day of submitting nomination papers which began from March 17.

All the candidates were accompanied by large number of their workers and supporters from their party offices and marched down to the office of the Zila Parishad. SUCI candidate Charnalata Chaliha  and two independent candidates Dinanath Das and Prabat Panika all of them filled nominations for Panery.

Party workers and supporters of the candidates carried party flags and raised slogans in support of the declared objectives of their parties and candidates. It was a colourful sight as the procession moved through the streets.People on the way watched with curiosity and interest as the processions moved on. It was no doubt like a fun fare. With hardly more than two weeks left for the polling, the heat and dust generally seen during the elections was seen. 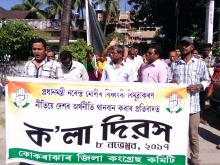 8 Nov 2017 - 7:55pm | AT Kokrajhar Bureau
Congress leaders and workers in Kojrajhar observed ‘Black Day’ to mark the one year of demonetization along with other parts of the country.  Daily wage earner and tea estate workers expressed...

29 Aug 2017 - 9:24pm | AT Kokrajhar Bureau
Hundreds of venture school teachers from BTAD areas staged a five-hour dharna in front of DC office in Kokrajhar on Tuesday demanding steps to provincialize their schools and to, amend the...