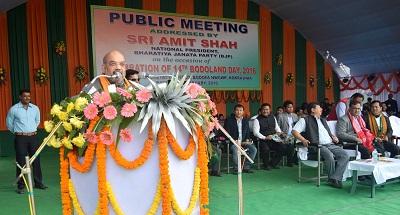 BJP national president Amit Shah has eyed to form next government at Dispur with the help of Bodoland Peoples Front(BPF) to make change the face of BTAD areas of Assam state both party have been contesting in the upcoming assembly election.

Shah, addressing a grand rally rally  at Bodofa Nwgwr ground in Kokrajhar on Wednesday organized to mark the 14th BTC Accord Day celebration said that Congress has never paid any attention to the plights of the Bodo people over the last 15 years.

Shah said, ‘It is not only for Bodoland, it is for all for nation. The bodo accord was a solution of the long standing issues that held in 2003. It is now become a good spaces of the country that showing good development and implementation in the council gaining more unity and spirits’.

‘There is a availing of representation to the Parliament from this region. BJP and BPF have been fighting on alliances in the upcoming election in the state and government forming at the Dispur is clear’,Shah adding said that Hagrama Mohilary is an inteligent and clever in his capacities of politics as he is running the entire region with his strong lead.

‘I will put pressure to make more step towards of Bodoland region to Prime Minister Narendra Modi for extending financial packages of more than 1000 crores to the region.PM Modi has been giving sustainable development spirits across the country including this region.We are putting strong and integrated spirits through bringing equal growth and development.It is a alliance in between BPF and BJP to gain strength of development of  Bodoland. Congress has ruled in Assam since 15 years, but yet no any good sign of change and integration was reached, they(Congress) only know how to corrupt and showed their party tactics.Assam has good resources in all fronts of expectations, but Congress has played negtaive attitudes towards in their steps.They never thought about development in the state.Illegal migrants came from Bangladesh due to allowed from Congress in the state’,he said.

‘We, the alliance of BPF and BJP would not allow to settle foreigners in the  state.We will form next government at Dispur, no doubt in our iniatives and voicing.Congress government has been failed to give utilization certificate to the centre since it's ruled,that is why they could not relesae of funds to the region

‘If you want change and development in the region as well state, then please support and vote to alliance of BJP and BPF in the upcoimng election’, Shah said. He has also urged peoples of the state to come forward to make corruption free society and held healthy united and integrated state.The integration spirit of the Bodo Accord would be continued in coming days  and Bodoland should be upgraded in healthy environment through unity and peace,Shah added.

11 Feb 2014 - 6:58pm | AT News
Four BJP legislators are dead opposed to Prasanta Phukan as the party’s legislature committee head in the Assembly.They write to the party leadership to remove him from the post following the...