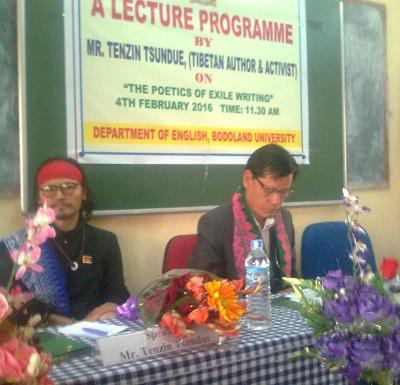 A lecture programme was organized by department of English, Bodoland University, Kokrajhar on February 4. Renowned poet, essayist and Tibetan activist, Tenzin Tsundue spoke on the topic of  “The Poetics of Exile Writing”, who was born, brought to a Tibetan Refugee family and educated in India. He basically writes about his experiences in exile which he has poeticized in his poetry.

He said, “I find the life of an exile extremely fascinating, and often wonder about what I call the “Exile-nation””. As an activist writer his ideology of writing is “Writing and resistance”. He is widely moving giving lectures and sharing his experiences and ideas in different universities of the world.

7 Mar 2014 - 7:35pm | AT News
Tension is simmering in Tinsukia district bordering Arunachal Pradesh on Friday after the miscreants from the neighbouring state have asked the Assamese people to quit the place.Local residents in...

17 Oct 2015 - 10:08pm | Siddhartha Handique
The Golaghat police are all set to ensure peace and normalcy during the Durga Puja celebrations. The policemen in the town conducted a mock drill at the Golaghat Sadar Police Station on Friday....