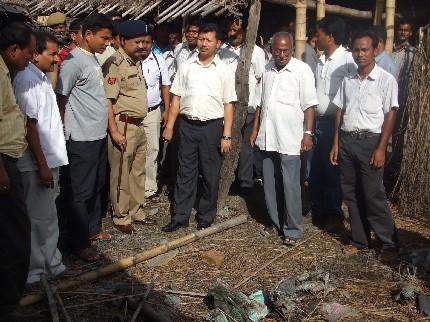 Bodo Teretorial Council (BTC) Chief Hangrama Mohilary blames lapse in security for the Kumarikata blast on 29/06/2008 that claimed seven lives including three women and injuring more than 70. Talking to this correspondent in Guwahati Medical College Hospital (GMCH) after visiting the injured of the blast he said that as a part of the government I owe responsibility for the blast and condemn the heinous crime what so ever may be the reason behind it. When asked who do you think may be behind the blast, gesturing he replied there are a number of armed militant outfit operating in the region. “It can be the handiwork of any of the militant outfit. In fact we have demanded enquiry of the blast.” According to Mohilary BTC has been demanding adequate security measures in tense region like Baska and Chirang. There are hardly 10-15 police personals in each outposts.

Replying to a question regarding compensation to the victims he said that the state government needs to look into this affair soon. He expresses deep solidarity and grief to the victims of the blast and tagged it a cowardice act of violence.

Assam Chief Minister Tarun Gogoi too visited the injured at Gauhati Medical College Hospital and refused to interact with media persons there due to time constraint as informed by CM's press advisor. GMCH superintendent informed that all the medical facilities including blood and medicines have been issued free of cost to the injured under going treatment. Conditions of three injured are stated to be critical while others are reported to be recovering soon. On asked how long it would take them for release GMCH superintendent replied that blast injured takes a long time for recovery but best efforts have been put up for the treatment. Interestingly Health Hinister of Assam Himanta Bishwa Sharma has not found time to visit the injured in the hospital as told by the attendant of the patients.

21 Jun 2017 - 9:07pm | AT Kokrajhar Bureau
The International Yoga Day celebrates at various places in Kokrajhar district along with rest of the country on Wednesday.The district administration,Kokrajhar organized the day at Govt HS & MP...