Dipen Boro, vice-president and Lawrence Islary, general secretary of the ABSU in a press release said, ‘It is an act of coward and shameful attack on student community who are innocent and ignorant. Such act of brutality cannot be tolerable to the world community’.

The students union appeals to stand united in this critical period and come forward to fight against terrorism and the kind of vehement attack on innocent student. The union prays for the departed soul, who had lost their valuable life in early time and extends our concerned to the deceased family on this time of sorrow. A candle light progamme has been organized in all the district headquarters for peace and in memory of the untimely death of the innocent students,the union leaders said.

The students union also expresses its deep sorrow on the sudden death and suicide incident of the Dalit student and scholar Rohit Vemula of Hyderabad University on January17 after the university allegedly initiated disciplinary action, expulsion from the university against him and a few colleagues for their involvement in student politics. The students union has condemned such act of intolerance and actions on Dalit students and demand for high level enquiry into the incident for which he had compelled to end his life, the release added.

29 Jan 2009 - 8:53pm | editor
There is fierce gun battle between ULFA and police in upper Assam's Sivasagar district. According to information, the encounter is taking place at Kanubari area in Nazira subdivision. Army and CRPF... 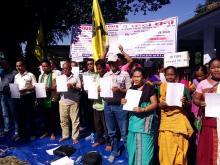