A 14-feet-long python weighing more than 50 kg was rescued from a pond in Jorhat town and handed on Saturday whuich was later handed over to the forest department.

According to information, the snake was found in a small pond near the Jorhat engineering College in Kasogoral area by the local people, said forest department sources.

The authorities have allowed to release the python in the nearby Kaziranga National Park.

26 Jul 2012 - 7:20pm | editor
A home ministry team visited Dhubri to take stock of the prevailing law and order scene in the district in the wake of the spreading ethnic clash. Led by home ministry’s joint secretary... 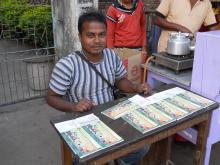