A two-days-long 15th annual conference of the Sivasagar district All Assam Students Union (AASU) was held at Maut Gaon, Simaluguri on on January 4-5. The new executive committee  was formed in this conferance with Samiron Phukon became the general secretary and Ashim Dutta as the new president.

Members of Nazira Anchalik AASU Unit walked out from the repeesentatives meetings due to the internal disputes. 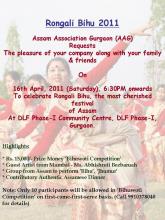