Established in 1948 at Maligaon the school has been producing good number of successful students who are part of the nation building process at different capacities but also brought fame to India while serving in abroad.

In this connection a two days long alumni meet is arranged by Netaji Vidyapith Alumni Association (NVPAA) to connect all the ex-students of the school spread throughout the globe for the welfare of the school students.

The eleven (11) successful NVP students of HSLC & HSSLC batch 2015 will be awarded by the alumni association during the meet.

Expressing the initiatives of the association, Lovely Mukherjee, General Secretary, NVPAA said, “This reunion is a point to connect all the alumni students through a get together to plan for the betterment of the school and upliftment of the future generations to come.”

Mukherjee also appealed the ex-students expanded at every nook and corner of the nation and abroad to enroll and attend the sessions to add value to this grand reunion.

Apart from that Parnava Bannerjee,new face of modern song  from Bengal is the attraction of the cultural night of the re-union with the ex-student talents of the school.

For the development of the school and encouragement of the students, the NVPAA, has already taken the responsibility of higher studies of two needy students who passed HSLC in 2015. The association has also installed two drinking water purifier units for the existing students.   Despite that the alumni students had oragnised a cleanliness awareness programme for the school students too. 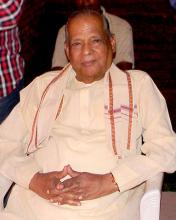 21 Apr 2015 - 8:34am | AT News
Former Assam governor JB Patnaik passed away following a sudden ailment on Tuesday. He was 88. According to his family sources, the former Odisha chief ministes breathed his last at a local...

19 Mar 2017 - 1:08pm | AT News
A memorial meeting was organized at North Bengal Press Club, Siliguri on Friday to offer acknowledgment to the well known media employee Fulguni Mukherjee. The participants including the NFNE...