Two injured on mishap in Kokrajhar 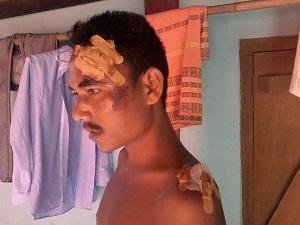 According to a injured person, a bike head on collided with a Tata mobile van bearing registration AS16C-0383. On the same night, a Xylo vehicle bearing registration AS26-4285 met road mishap due to improper road indication on the national highways.Two of the injures were identified as Atul Basumatary of Jharbari and Dutirmoi Basumatary of Patgaon.  Atul Basumatary was immediately rushed to Kokrajhar MRM hospital, but later referred to Siliguri hospital following critical condition on the same night. Condition of the Atul said to be still critical, told a police official.

Local people alleged that construction of four lane along the national highway has been delayed. They also slammed that the vehicle used in the construction and drivers have no valid documents while engaging in the sites.

In another incident, a former BTC MCLA Madhav Karki injured. Karki slammed the construction authority of four lane along the national highway and district administration foe not taking stern action for early completion of the road construction.