GUWAHATI:Yet another sensational murder case in Guwahati sends no less shock and anger across the state on Tuesday. The victim is a college girl who was kidnapped by a youth to be killed in his house in the heart of the city as she refused to be with him.

Sweta Singh, the KC Das College student went missing on Monday on her way back to home from college. She was allegedly kidnapped by Govind Singh in Bharalumukh area where he killed her following a quarrel at his house. Then she was set on fire to destroy evidence.

Acting on a complaint from Sweta' father, police recovered thr charred body and arrested the youth, his mother and another whom a local court in the city remanded to five days police custody.

Meanwhile, many organizations and individuals have demanded capital punishment for Govind Singh, who allegedly kidnapped and killed the college girl who topped the HS commerce stream two years back.

" We need justice. This is a fit case for capital punishment. Otherwise, we will move the higher authority," said Jagriti Saikia, a local resident of Shantipur.

14 held for shoot out

20 Jan 2014 - 12:50pm | AT News
Police have picked up altogether 14 people in connection with the Ramphalbeel shoot out where 5 people were killed and two others injured on Saturday night.According to information, these were... 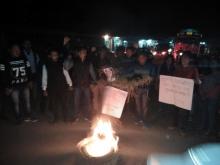 13 Apr 2012 - 2:33am | editor
Good news for Assam a day before the Rongali Bihu. Teen boxer Shiva Thapa on Thursday struck gold showing a brilliant performance at the Asian Olympic Qualifiers in Astana. The 18-year-old teen...