Thousands of people on Kokrajhar welcomed Proneeta Swargiyary after she landed the home district after clinching the DID championship.

She was accorded heroic welcome at a joint felicitation programme by ABSU, Kokrajhar CIT and Kokrajhar district unit of Dularai Bodo Harimu Afad.

A cultural night was also organised to greet her where Menokha, Mahadev, Probin performed. 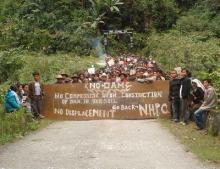 17 Feb 2015 - 7:50pm | Mubina Akhtar
The Dibang movement fell silent as the Union Minstry of Environment and Forests granted clearance to the project last September after a reduction in the dam height by10 metres. After the Dibang it is...

19 Nov 2013 - 11:06pm | Jayanta Kumar Das
One Dayal Kerkata (28) has been killed and Girish Kerkata (55) has been seriously injured by of wild elephants last night at Bormukali near Nonoi Forest Range Office.According to information the...