Congress president and UPA chairperson has virtually kick started campaign for the upcoming Lok Sabha polls at a farmers rally organized by the state Assam unit.

Addressing the huge rally, the UPA chairperson called the farmers the driving force of Indian economy. She said Assam has been Centre’s special attention if the Assam Accord is an example. “ India survives only at the mercy of the farmers and that’s why our Government will financially help the farmers,” he said.
She further said the government has a huge Rs 600 crore fund to uplift tea cultivation. Gandhi further justified the recent fuel price hike citing the international crude shock.

In his address, Chief Minister Tarun Gogoi, in his address at the farmers rally claimed that Assam’s economy is progressing during the last two years of his Government and that the state’s capita income has jumped to Rs 22,000 during his regime from Rs 13,000 during the erstwhile government’s term.
The rally was attended along others by senior Congress leader Margaret Alva, union ministers Santosh Mohan Dev, Bijoy Krishnai Handique. 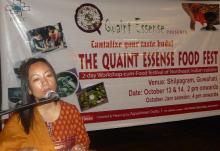 20 Jan 2017 - 8:21pm | AT News
Senior Congress leader and a former minister in Tarun Gogoi’s cabinet will address the media tomorrow (Saturday, 21 Jan) at Guwahati Press Club. The scheduled time for the press meet is reported to...