Choppers are back to the sky of Arunachal Pradesh three months after a Pawan Hans chopper carrying Tirap Deputy Commissioner Kamalesh Joshi crash landed at Khunsa.

1 Sep 2014 - 2:23pm | AT News
RHISHAV GOGOI, MORANHAT: At least three people died and over 30 others sustained critical  injury when an Oil India Limited-owned gas pipeline exploded in Moran along the Sivasagar-Dibrugarh...

3 Feb 2014 - 5:19pm | AT News
The Centre has sanctioned a huge amount of Rs 288 crore fund to update the NRC within a period of 3 years.This was what the government told the Supreme Court on Monday. The Centre disclosed the... 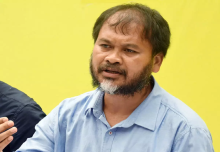 28 Mar 2022 - 5:40pm | AT News
Guwahati: Independent MLA from Sivasagar has strongly objected to the state assembly Speaker’s ruling on cross voting in the Rajya Sabha polls. Gogoi said that it was not proper for the Speaker to...