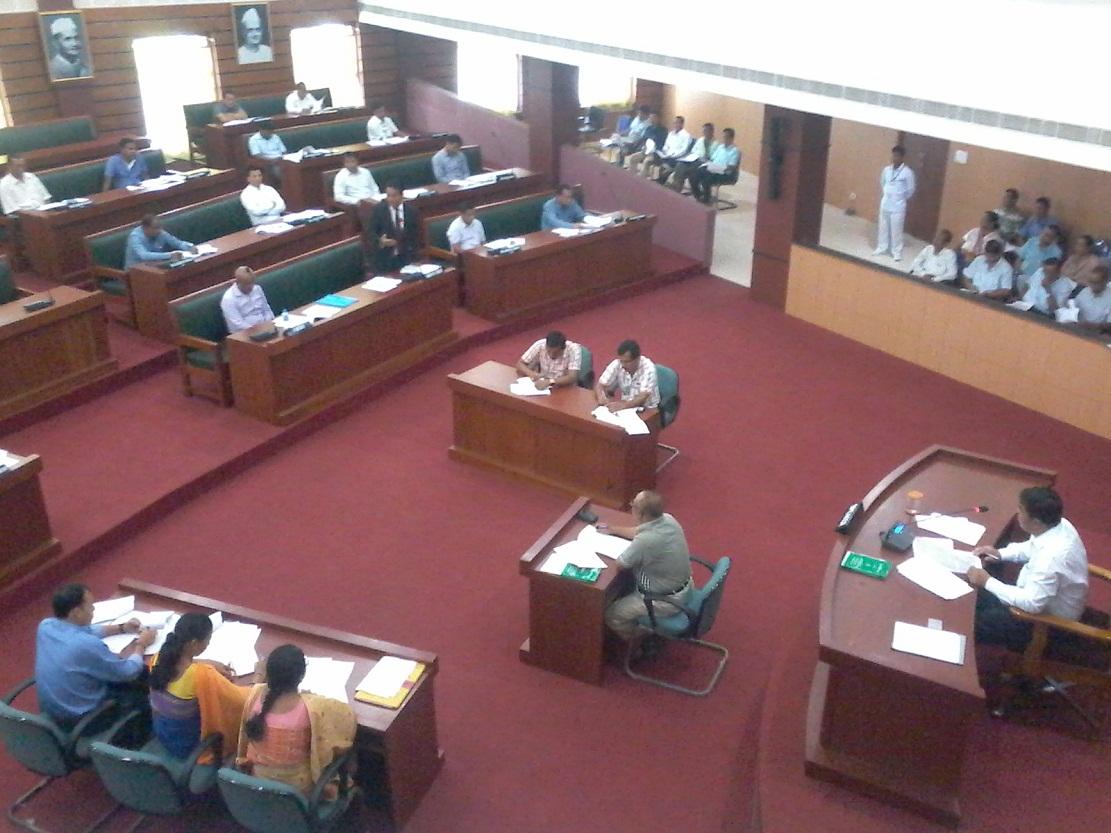 The BTC autumn session saw an uproar and disrupted for around fifteen minutes among the ruling and opposition members in the BTCLA autumn session over the formation of Village Council Development Committee (VCDC) and Territorial Council Level Coordination Committee (TCLCC ) today in the council.  The one-day Autumn Session, 2015 of the Bodoland Territorial Council Legislative Assembly was held today at the BTC Assembly, Bodofa Nwgwr in Kokrajhar.

As per the day business, the session began with the question hour questions where many members put questions to the concern executive members.

The session saw debate and uproar on the House on various issues, especially from the opposition members who expressed dissatisfaction over the reply on many issues.

Maheswsr Ray, Opposition MCLA raised query into equal distribution and rights involving elected MCLAs, but deputy chief Kampa Borgoyary, who had replied to the question was not satisfied and the opposition member and ruling party BPF members saw strong debate on the issue. The opposition members slammed ruling party members for not giving attention to reply on suitable situation.

The issue of withdrawing the security cover of the BTC chief and his deputy and other members were also raised with the House .

Opposition member Rwngwra Narzary also expressed concern over the development saying that they have only one security each and many a times they were forced to go out.

The house later urged the Speaker to take up the issue with the state government and urged to reinstate full security cover to all.

Mohilary also said he is giving up security cover and if anything happens to him, the state government will be solely responsible.

The functioning of the House was disrupted for over 15 minutes after the opposition members demanded proper reply on the selection of VCDC and TCLCC members on a queries by opposition member Chakradhar Das .

Opposition member Guneswar Goyary asked the BTC chief Hagrama Mohilary on the guidelines and utilization of CD funds from the year 2010 to 2015, following which the BTC chief replied that the fund was utilized properly and there is no need for the opposition to worry.

7 Apr 2017 - 5:48pm | AT News
The United Liberation Front of Asom observed its foundation day on Friday reiterating its struggle for an independent Assam compelling authorities to tighten security across the state. ULFA cadres...

No Cong MLAs to join BJP!

22 Nov 2014 - 9:10pm | Inamul Islam
Amid fluttering in Congress over move of 20 MLAs to join BJP, Rongiya MLA Ghanashyam Kalita said that nobody from the ruling party will switch loyalty to BJP. Talking to reporters in the sidelines of...

18 Mar 2012 - 4:46am | editor
Good news for AIDS patients and their relatives. The Assam government on Saturday announced that it would give financial assistance to the next of kin of those who have died of AIDS. Health...