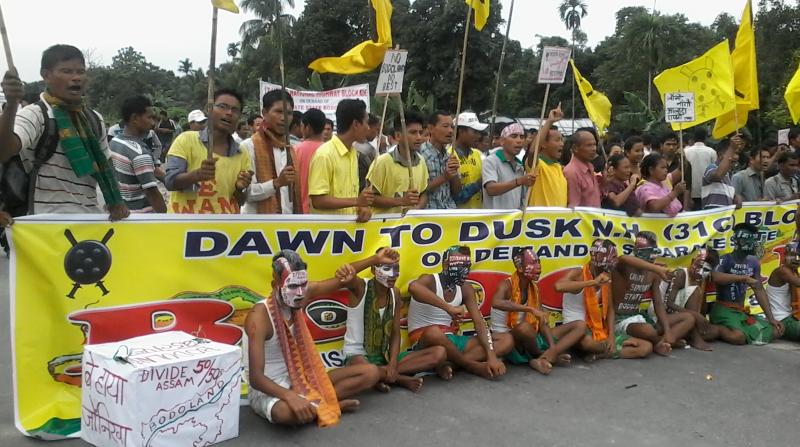 The demand for separate state of Bodoland, has again got a gained today as tens of thousands of supporters and common publics thronged along the 31C National Highways at Ramfalbil in Kokrajhar district of Assam to blockade, demanded early creation of Bodoland separate state carving existing Assam and held good governance and people's development.

He told that create Bodoland state under Article 2 and 3 of Indian constitution without any delayed.

He has warned for vigorous agitation like 100 hours rail blockade, 100 hours national highway blockade and mass agitation to the demand of separate Bodoland state in 7th early manner.

He has slammed government at the centre said that the govt have not been initiated to solve issues of the Bodo as their demands had passed around 50 years and several new states were created within country, but  Bodoland demand was not been created so far. He said that early creation of Bodoland state would be the last aspiration of the Bodos and indigenous peoples in the region, otherwise more vigorous movement is compelling in today's era.

Dhiren Boro, president of NDFB ( P ) has urged the centre to create separate state of the to meet good governance and healthy development on the northern part of Brahmaputra. He also alleged that govt has not been showing good gesture while solution of the Bodo issues as his organisation has come to the main  stream in 2005, but no strong progress was met till today, Boro added.