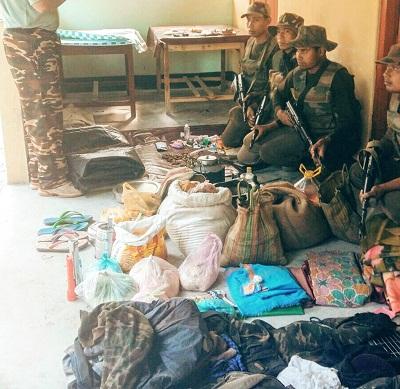 Dreaded NDFB-S militant B Bidai was believed to have a narrow escape when security forces raided a remote village in Chirang district on Sunday.

Acting on a tip off, police and CRPF jawans conducted a raid in Amlaigur village in the BTAD district where a fierce gun battle took place in the wee hours. A linkman is said to have been killed in the encounter where the most wanted militant managed to disappear from the spot.

Security forces have been cordoning off the entire are in search of the fatal militant. Police claimed to have seized some arms and ammunition from the spot.

21 Mar 2014 - 11:19am | AT News
Union minister Ranee Narah filed nomination papers as Congress candidate in Lakhimpur on Friday.Accompanied by thousands of party workers, the Union minister arrived in the Deputy Commissioner’s...

6 May 2018 - 9:28am | Akshaya Pranab Kalita
NAMRUP: A sudden phone call a self-styled ULFA(I) rebel to a local journalist struck no less panic in a village in Charaideo district forcing the security forces to step in on Sunday. The caller...

Pall of gloom in IIT, Guwahati